Back to all posts

For the Lord is My Tower

I had just purchased a new Roland E-86 arranger keyboard in 1994. 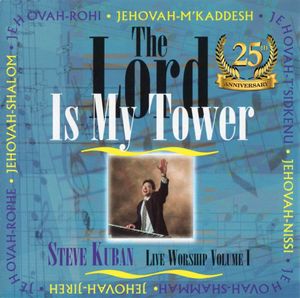 While learning its various rock beats, this catchy simple melody suddenly popped into my mind. It was a happy sound, and I started singing, "And now I'm so happy." Then as I waited on the Lord for a little more dramatic or meaningful inspiration, these words suddenly burst forth from heaven:

The words were a declaration from two passages of Scripture I had committed to memory and often quoted:

Proverbs 18:10
The Name of the Lord is a strong tower;  the righteous run into it and are safe.

...that (our) spiritual eyes would be opened to see and understand the greatness of God's power toward us who believe, which He demonstrated in Christ when He raised Him from the dead, and set him at his own right hand in the heavenly places,21 far above all principality, and power, and might, and dominion, and every name that is named, not only in this world, but also in that which is to come: 22 and hath put all things under his feet. 2 1And....He hath quickened us together with Christ...and hath raised us up together, and made us sit together in heavenly places in Christ Jesus!

These dynamic truths exuded from the song with an authority and anointing that went very deep. I could feel it when I sang it. Musically it was the simplest of songs, containing a mere six lines and using only three chords (G, C and D). I chose to keep it to myself and not share it with anyone, in case the Lord might have me add more to it.

About a month later, our church was having a weekend youth camp with guest speaker  Steve Fry (composer of O The Glory of Your Presence). Our worship team had already prayed together and were about to go onto the stage to begin the final service. I had wondered if I should teach the song to the youth, but had been hesitant because it was such a simple song. Suddenly the Lord broke through my hesitancy and spoke to my heart that we HAD to sing the song — now!

But I hadn't yet taught it to any of the team, which made it a little awkward because we were just about to go onto the stage. But I was confident in this team with whom I'd worked many years and which had developed an ability to flow together in prophetic and spontaneous songs. So I summoned the courage and said, "Guys, sorry but I really feel in my heart to sing this simple song tonight. What do you think? Can we do it?" I sang it for them, they liked it and were game. We went onto the stage, and moments later 'we' taught all the youth "For the Lord is My Tower." It was an instant hit! We ended up singing it over and over and over. I was taken aback by the reaction and enthusiasm of the young people and how much they loved that little song! But it surely was a bell-ringer from the get-go, and (more importantly) a meaningful and spiritually dynamic song to everyone's heart and spirit!

After the camp concluded we drove the two hours back to our church for the Sunday service. That evening the youth pastor and I shared with the congregation how the weekend had been very successful, and that 'this little song' had helped capped it off. The moment I began teaching the song to our congregation, suddenly the entire youth-group literally stormed the front of the church! By the end of the second time through the song, the whole church had caught that same spirit of liberty and victory which the youth had. It was truly amazing.

As we began singing the third time through, one of the girls from the youth group (who had ran to the front of the stage and was jumping and praising the Lord enthusiastically right in front of me) put her hands up in the air and formed the 'tower' sign. Immediately the Holy Spirit told me to step out from behind the keyboard and 'teach them the actions to the song!' — But the problem was, I had never even thought of any actions prior to that moment. But I obeyed and went out in front of the 400 people and said, "Let's do the actions!" I lifted my hands in a tower sign, not knowing what would come next, and line by line God faithfully gave me each action, which I immediately showed the people. Little could I have imagined that these very same actions would soon become universally done by millions worldwide as they sang this simple little song of the Lord's name and His victory!

Well...the rest is history! Today millions around the world sing this song with great enthusiasm, lift their hands in the familiar tower sign, flex their muscles, reach up and pull down strongholds, kick the enemy, pray, crush the devourer, and then jump up and down in glorious victory over the powers of darkness, declaring, “For The Lord is My Tower!”

For the Lord is My Tower
And He gives me the power
To tear down the works of the enemy
In a difficult hour
He will crush the devourer
And bring the powers of darkness underneath my feet!